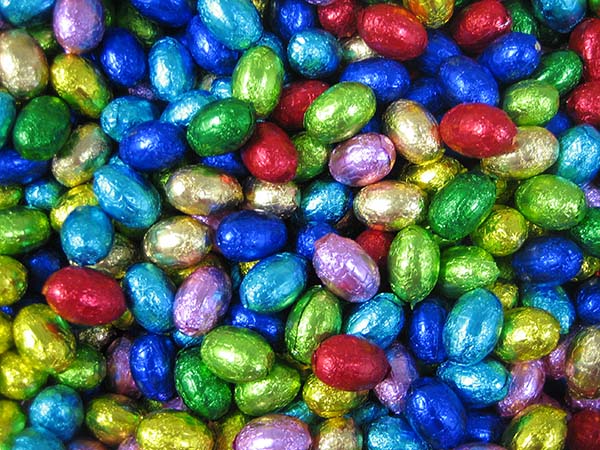 Unusual Easters
This Easter is going to be different to the usual one. But not as crazy as the one Ed has written about below. Have a read and see if you can write your own crazy Easter story. If you can’t think of anything, try some of the ideas at the bottom of this story. Feel free to send us your story if you’re proud of it and we’ll put it up on our website for people to read.

The Oddest Egg Hunt Ever
For years, Benny and April had been going next door to hunt in their next-door neighbour’s backyard. They had a big yard and a grandmother, Luciana, who loved getting visiting for easter and getting up early and hiding eggs in the garden. Their neighbour, Charlie, was an only child, and he was more than happy to share his eggs with his friends. But Charlie and his family had moved overseas and there was no-one in the house next door, except the groups of people who came through every Saturday morning to think about buying it.

When Benny and April spoke to Charlie on Zoom, his parents suggested that since the house was yet to be sold, they could still use the garden for their egg hunt. On Easter Sunday, the kids got up early. It was a beautiful morning and they raced next door. On the ground were hundreds of eggs in colourful foil wrappings and they began to put them in the baskets they has brought with them. They missed their friend, but forgot him for a little bit as they ripped the foil off eggs and started to gorge upon their chocolate contents.

After about an hour of hunting, the kids were full, their baskets were full and the garden had lost much of its sudden colours. They were about to give up when April noticed a trail of hidden eggs they hadn’t seen before. April and Benny followed them under the house to where Charlie’s dead used to keep his wine cellar. The eggs ended at the door, but Benny wondered whether there might be more inside. When he opened the door, he saw three of the biggest eggs he had ever seen. As he and April looked inside, one of the eggs began to wobble. Before long, cracks appeared at the top and Benny and April thought they could hear a familiar voice. It sounded like ghosts had taken up residence in their friends old house. But they hadn’t. The egg continued to crack, and as it did, it became apparent that Charlie was inside it.

“Thank you,” he said when he emerged from his chocolate prison, looking a bit fatter than usual, but otherwise the same. I’m not exactly sure what happened but I think we’ve been taken over by imposters …

Write your own crazy Easter story!
SOME STORY IDEAS!